Jimmy Nelson was born in 1928 in Chicago, Illinois. Had it not been for one lucky number, the world of ventriloquism may never have had one of its most influential and talented performers in the history of the art form. In 1937, when Jimmy was nine years old, his Aunt Margaret won the grand prize which was a Dummy Dan ventriloquist puppet at a local bingo game; she gave it to Jimmy that Christmas. As a child, Jimmy was horribly shy and one day brought his puppet to school for Show and Tell. His fourth grade teacher, Mrs. McSweeney, encouraged Jimmy to perform with his puppet having him recite one lesson each day. His fifth grade teacher, Mrs. Shanley, continued to encourage Jimmy and his father helped him write little routines. The vent world was never the same again.

It didn't take long for Jimmy to begin performing away from school. In the late 1930's and early 1940's, during his teenage years, Jimmy appeared on stage on amateur nights at the local movie theaters honing his craft. He also ventured out as often as he could to watch professional ventriloquists. It was then that he met his first mentor, Herman Stoike, who performed as Uncle Herman. Uncle Herman took Jimmy under his wing and helped Jimmy develop into an even better ventriloquist.

Bob Evans, another very popular ventriloquist at that time, also influenced Jimmy. Whenever Evans appeared in Chicago, Jimmy was there in the front row watching. Eventually Jimmy went backstage to meet his idol, and Bob Evans was kind enough to tutor Jimmy every time he came to town. Danny O'Day's attitude and voice are a direct result of Bob Evans' influence. Jimmy worked very hard on his act, and at one of the movie theater amateur nights, a Chicago agent by the name of Les Lehr stopped by to check out the local talent. He spotted Jimmy and became his first booking agent. In 1945, the 17 year old ventriloquist was working so much that he needed a professionally carved figure. Frank Marshall, the premiere figure maker of the time, and also a Chicago resident, made the Danny O'Day that we are now familiar with. Jimmy continues to perform to this day with his original Danny.

It was 1947 when Frank Marshall recommended that Jimmy have him carve a second Danny in the event the first one got damaged. However, Jimmy was not satisfied with the resulting figure and had an idea. He created another partner for the act, the sophisticated Humphrey Higsbye, which gave him considerably more versatility as Danny could now spar with Humphrey with Jimmy acting as referee. One of their classic routines was the song, “Rag Mop” with all three of them singing together.

In 1949 Jimmy got a new talent agent. The very well connected Lou Cohan wanted this young ventriloquist in his agency and convinced Jimmy to come on board. Cohan was a terrific agent getting Jimmy higher paying bookings and even his first television show. Jimmy created and hosted Holland's Happiness House on WGN-TV. He was only 21 years of age. It was this show that gave Jimmy the opportunity to appear on Ed Sullivan's Toast of the Town in 1950. His appearance was so well received that Ed Sullivan had him return a month later.

Farfel was "born" in 1950 when Jimmy came up with the concept of a dog puppet. He had Frank Marshall custom-build the new character, which would soon become a national icon.

Jimmy moved to New York City and throughout the 1950's appeared on many television shows. It was one of the busiest decades any entertainer could have had. He appeared on the Ed Sullivan Show five times between 1950 and 1953, appeared on Your Show Of Shows twice, Cavalcade of Stars three times, made guest appearances on the quiz shows Bank On The Stars, Quick As A Flash, Strike It Rich, Down You Go, and the variety shows The Pat Boone-Chevy Showroom, Cavalcade of Bands, The Colgate Comedy Hour, The Kate Smith Show, The Garry Moore Show and The Jackie Gleason Show. He was also the Emcee for his own quiz show, Come Closer, and hosted his own radio show with his puppet partners for two seasons called Highway Frolics.

In 1952 Jimmy landed his biggest role to date as the spokesman for Texaco on The Texaco Star Theater hosted by Milton Berle. This role catapulted Jimmy to national fame as he appeared week in and week out on this hugely popular show. Jimmy continued to perform live as well, appearing at Radio City Music Hall six times, The Copacabana five times and with numerous appearances at such popular venues as The Latin Quarter, The Cocoanut Grove, The Chicago Theater, The Chez Paree and The Edgewater Beach Hotel and in Las Vegas at the El Rancho Hotel, The Flamingo Hotel, The Desert Inn and The Riviera.

In 1955 Nestlé was searching for a new, dynamic spokesperson for their Quik line of chocolate drink. Jimmy, Danny and Farfel auditioned for the role and commercial history was made. For over a decade the trio made commercial after commercial that thrilled audiences young and old and sold a lot of Quik chocolate drink. Their signature singing of the jingle became iconic. Originally live, the commercials were later filmed allowing for more exciting scenarios. Over 120 commercials weremade during Jimmy's tenure.

The 1950's were not only an important decade professionally, but personally as well. Jimmy's stature in the entertainment world grew exponentially and his managerLou Cohan wanted Jimmy to have a top-notch opening act. In Cohan's stable of entertainers was the beautiful and talented Betty Norman. In 1951, Lou sent Betty to Minneapolis to open for Jimmy at the Radisson Hotel's Flame Room. The highly regarded Supper Club was the perfect venue to try out the new opening act. Betty, a smash with the audiences during the two-week run, was incorporated into Jimmy's act. This professional and personal relationship was cemented when Betty and Jimmy were married in the spring of 1956.

The 1960's was a busy decade too. The Nestlés Quik commercials were being produced monthly, and in 1961, Jimmy hosted his own show, Studio 99 1/2 on WNTA in New York City. Although a children's show, adults loved it too for it's sophisticated humor. Jimmy also made time to do other television shows. He appeared on To Tell The Truth, Mack & Meyer For Hire, and on The Ed Sullivan Show. In 1963 the Juro Novelty Company teamed up with Jimmy to manufacture a version of Danny O'Day and Farfel for children. They were very popular, and in 1964, Jimmy approached Juro owner Sam Jupiter with a unique idea for teaching ventriloquism. In time for Christmas, Juro released Jimmy Nelson's Instant Ventriloquism, a fun and educational way to learn this art form. It was very well received and in 1966 Juro released Jimmy's second instructional album, Jimmy Nelson's Ventriloquism 2. These two albums influenced ventriloquism as never before.

The 70's through the 2000's brought a change in entertainment tastes and Jimmy performed live and on television as often as possible. In 1971 Jimmy became the spokesperson for First Federal Savings and Loan of Fort Myers, Florida, a relationship that continued well into the 90's. In 1978 Jimmy co-starred in HBO's Vent Event. It was also in the 70's that Jimmy became an ardent supporter of the Vent Haven Ventriloquists Museum in Fort Mitchell, Kentucky having been on the Board of Advisors since its beginnings. He still attends The Vent Haven ConVENTion yearly, sharing his wisdom and knowledge with all who come. In 2005, Kelly Asbury's book Dummy Days was published. This overview of the golden age of ventriloquism featured one entire section on Jimmy Nelson's career. Jimmy was also highlighted in the 2010 feature comedy documentary, I'm No Dummy. In 2011, two of the greatest honors that could be awarded on this noteworthy entertainer occurred at the ConVENTion. To celebrate his 70th year in show business, he was bestowed with the title Dean of American Ventriloquists, a title never before given in the ventriloquist community. And Building Number 4 at the Vent Haven Ventriloquists Museum was named The Jimmy Nelson Building, forever securing his legacy in the entertainment world.

Jimmy continued to perform and support the Vent Haven Museum until passed on September 24, 2019. 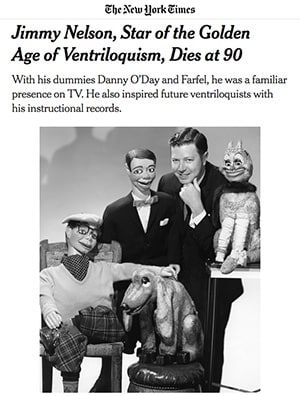 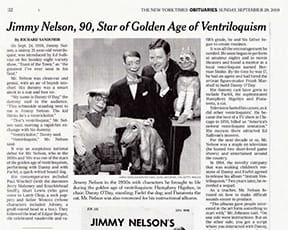